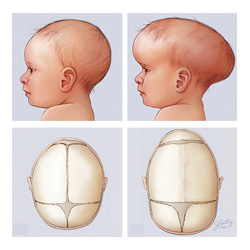 Craniosynostosis is a term that refers to the early closing of one or more of the sutures of an infant’s head.

The skull is normally composed of bones which are separated by sutures. As an infant’s brain grows, open sutures allow the skull to expand and develop a relatively normal head shape.

If one or more of the sutures has closed early, it causes the skull to expand in the direction of the open sutures. This can result in an abnormal head shape. In severe cases, this condition can also cause increased pressure on the growing brain.

In sagittal synostosis (scaphocephaly), the sagittal suture is closed. As a result, the infant’s head does not expand in width but grows long and narrow to accommodate the growing brain.

The sagittal suture is the most common single suture involved in craniosynostosis. The incidence of sagittal synostosis in the population is approximately 1 in 4200 births. Males are affected about three times as often as females. When the metopic suture is closed, this condition is called metopic synostosis. You may also hear the term trigonocephaly used to describe your child’s head shape. The deformity can vary from mild to severe.

There is usually a ridge down the forehead that can be seen or felt and the eyebrows may appear “pinched” on either side. The eyes may also appear close together. The coronal suture goes from ear to ear on the top of the head. Early closure of one side, unilateral coronal synostosis (Plagiocephaly) results in the forehead and orbital rim (eyebrow) having a flattened appearance on that side. This gives a “winking” effect.

These features may also be more apparent when looking at the child in the mirror. Both sides are fused in bicoronal synostosis (brachycephaly). In these cases, the child may have a very flat, recessed forehead. This suture fusion is most often found in Crouzon’s and Apert’s Syndromes.

How is Craniosynostosis diagnosed?

There are several clues that may have caused you or your doctor to suspect that your child has craniosynostosis. A misshapen head is usually the first clue. The anterior fontanelle, or soft spot, may or may not be open. The suspected diagnosis is confirmed by x-rays. A CT scan is also done to make sure there are no underlying abnormalities in the brain.