Deformational scaphocephaly is characterized by a long and narrow head shape, sometimes caused by consistent positioning of the baby on its side. Like brachycephaly, scaphocephaly is a deformity of proportion. Premature babies are particularly prone to this deformity since their skulls are so fragile, and a side-lying position is often used in the Neonatal Intensive Care Unit (NICU) for easy access to monitors and other equipment. Orthotic management focuses on normalizing the proportion and overall shape of the head. 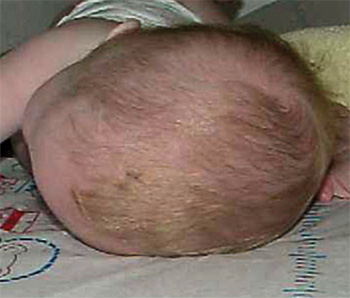 Infants with a scaphocephalic head shape have difficulty lifting their heads against gravity.

Scaphocephaly, derived from the Greek skaphe, describes a specific variety of a long narrow head that resembles an inverted boat.

It is a type of cephalic disorder which occurs when there is a premature fusion of the sagittal suture. The sagittal suture joins together the two parietal bones of skull. Scaphocephaly is the most common of the craniosynostosis conditions and is characterized by a long, narrow head.